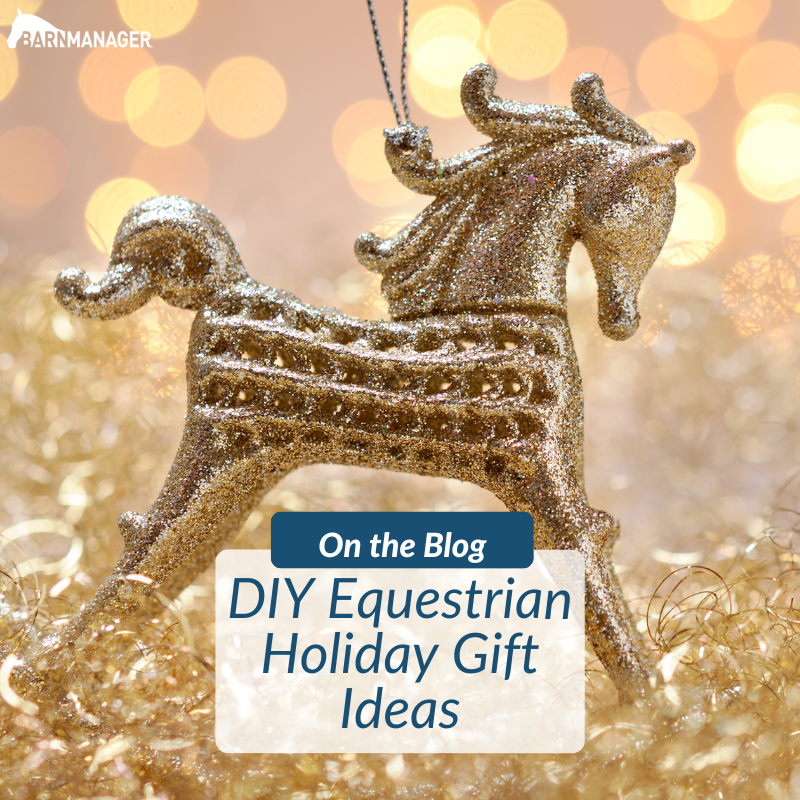 December 15, 2022| Jennifer Wood| in category Uncategorized No comments yet

The holiday season can be an expensive time of year, especially when shopping for equestrians. Instead of buying lots of pricey, store-bought items, consider making personalized gifts for your horsey friends. Read on for some DIY equestrian holiday gift ideas from BarnManager.

If baking is your specialty, then gifting your friends, trainers, managers, or grooms with homemade horse treats is a wonderful option. For an extra-special touch, put the horse treats in a decorative box or mason jar and add a bow. This is a great gift to pair with a card and maybe a few chocolate treats for your human friends to enjoy. 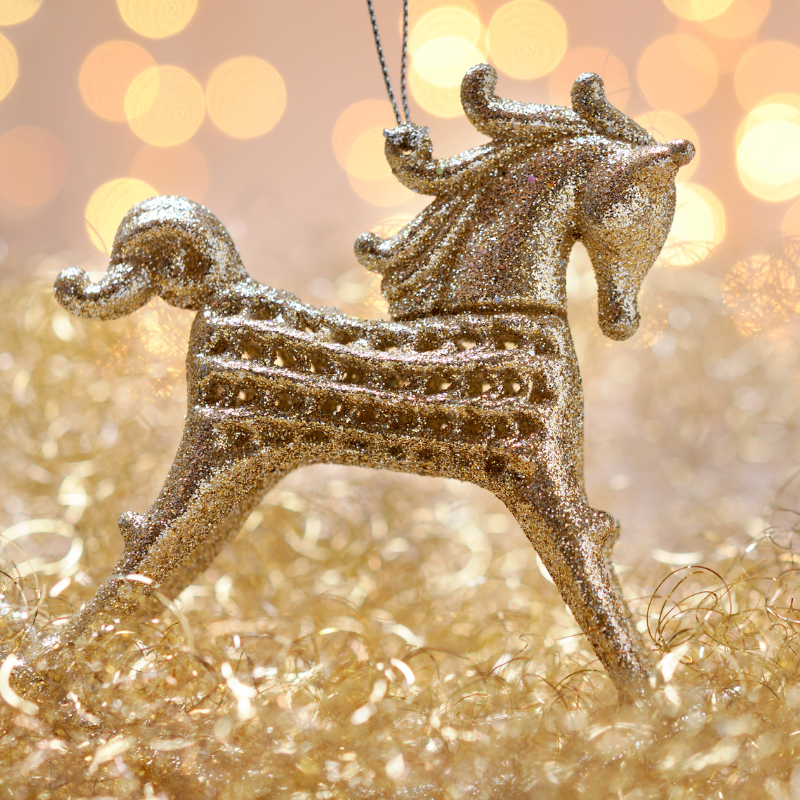 Deciding to make horse-themed ornaments gives you the flexibility to try lots of creative approaches. One option is to cut a horse figure or head out of felt and decorate it. If you are good at sewing, you could add stuffing between two pieces of horse-shaped felt to create a stitched ornament. Constructing a horse figure out of corks and decorating it with materials such as yarn and craft pipe cleaners is also another way to make this present. If you would like to make it more personal, buy a tiny picture frame, insert your friend’s favorite photo of their horse, and glue it on a string to make it an ornament.

Try out your woodworking skills by making a homemade horseshoe wall hanger. Start by collecting a few old horseshoes and nail them to painted wooden boards. This gift can be as simple or creative as you choose depending on how crafty you feel and how decorative you want it to be.

This DIY present is also best for those who enjoy woodworking. If you have some time and enjoy making things, this is a great gift for your favorite groom. If you are not skilled enough to make your own, consider buying a premade one and painting or decorating it for a personal touch.

If you are not the best at arts and crafts, consider buying a plain picture frame to decorate. You could paint the frame and even add your friend’s horse’s name at the top or bottom. Paint little horseshoes or ribbons on the frame, or glue on a few tiny equestrian-themed items from the craft store. If you purchase a larger frame to hang on a wall, consider adding a string to the bottom where ribbons can be hung. 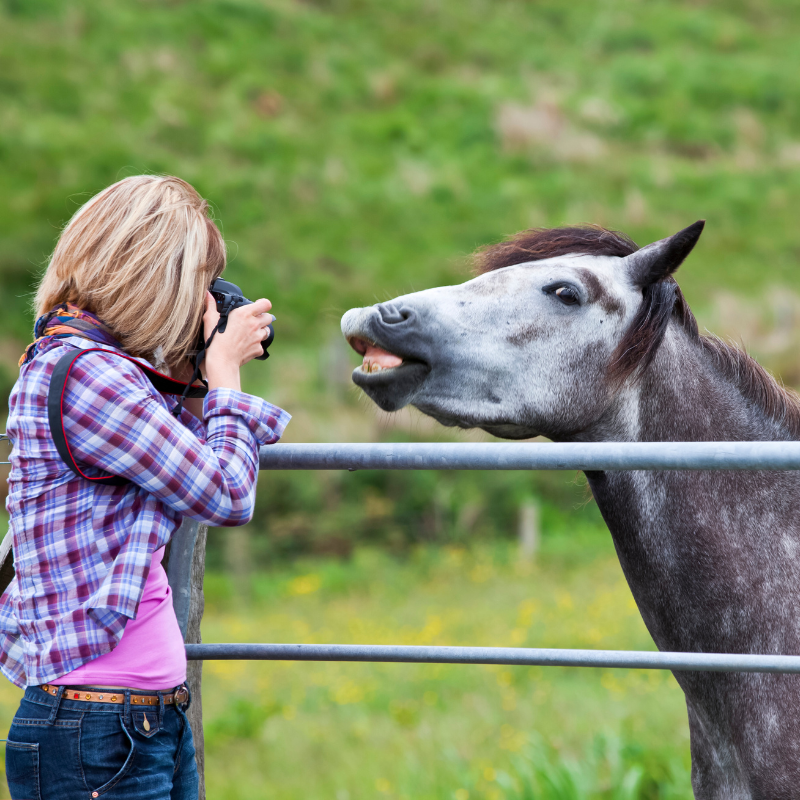 If photography is your art of choice, a personal photography session can be a very special gift for your friends, trainers, managers, or grooms. After the session, choose a few special photos to print out and frame for them. If you photograph several people at the barn, you could even make a scrapbook for everyone.

Instead of buying run-of-the-mill presents this year, go the extra mile and gift your friends, trainers, managers, and grooms with homemade and personalized goodies. 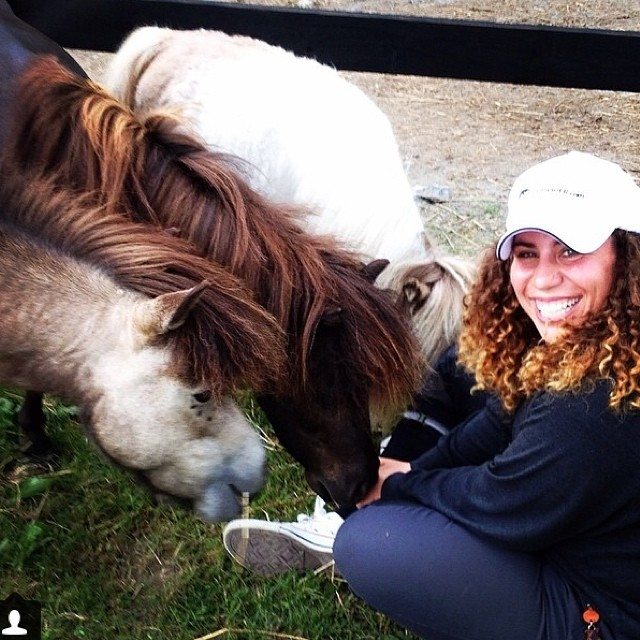 First Dates, First Impressions, The Joy of the Horse.

Jenny (the Director of Sales and Queen of Friendly at barnmanager.com) and I just returned from Denton, Texas where we visited with the AWESOME teams at Tom McCutcheon Reining Horses and McQuay Stables. We had an absolute blast, and have some exciting new features and programing coming your way! But more interestingly, Jenny and I had some very entertaining and somewhat enlightening conversation over dinner one night. As part of Jenny’s job at barnmanager.com, she finds herself meeting lots of new and interesting people on a daily basis. She is also the type of person who can walk up to anyone and have them laughing in a matter of seconds. She has this charismatic halo that follows her and envelops everyone in her presence. She is truly a ray of sunshine, and I am not exaggerating. Jenny is constantly reminded about the significance of first impressions. First impressions are her life. And lucky for her, she tends to leave a good one. But in our lives as both humans and equestrians, we find ourselves constantly struggling with how we hope to impress ourselves upon the universe. Obviously, everyone wants to leave a “good” impression. But what does that mean? Our equestrian upbringing has made us who and what we are. We have learned that nothing worth getting comes without hard work, some ups and downs, and often sacrifice. While Jenny and I are wildly different people with wildly different personalities, we find that our work ethic and our overall attitude and approach towards “work” is the same. This comes in large part  from the way we were raised….and by raised, of course i must lend some credit to our parents, but mostly I mean how horses raised us. Nothing given. Respect earned day after day. Things changing in an instant. Adapting could sometimes mean scrapping months of hard work and starting anew. And the rewards were epically more gratifying. If you came of age in a barn, you know what I mean. We take pride in everything that we do. In every accomplishment and in every failure we search for meaning and understanding.

We are proud of who we have become and how we arrived at this place. And yet, as Jenny discussed with me over a glass of Malbec, what does it mean for the non-horsey when we reveal ourselves as “people who ride horses?” What do our roles as “horse-girls,” equestrians or even people who work in the Equine Industry lend to their first impressions of us? While on a first date with a Dealer of Rare Violins (I will never be able to understand how or where she meets these people), Jenny struggled with the choice of whether or not to tell her new acquaintance what exactly she does for a living. What will it mean to him? And how on earth can one explain that they sell Web-based software to horse farms? Jenny and I seem to have found a way to keep one foot firmly planted in the horse world while allowing the other to dangle to and fro, testing the waters and occasionally diving in thigh high. Is it more of a 3rd or 4th date kind of thing? (This is all assuming that we allow them the luxury).

I assume that for anyone with anchors in two universes this question arises sooner or later. We are who we are, for better or worse. We aim to be our best selves, and to put that out into the world for others to see. And my best self is the person that horses made me to be.

For Jenny, the answer became clear as she started describing her job, and ultimately her life to her new musical friend. She hesitated at first when he asked her what she does for a living. It is nearly impossible to qualify or quantify what we do to a non-horse person. Jenny struggles with the fact that many of her childhood friends are pursuing careers as doctors, lawyers and real estate developers and seemingly having a larger impact on the world. What she does tends to feel small and immaterial in comparison. As she described to him what barnmanger.com is,  how it came to be, and how she has helped to develop it from its weanling stages, his face grew harder and harder to read. So she kept talking and struggling to explain something that is always slightly inexplicable. When she stopped, the violin dealer reveled in her passion, which he said shone in her eyes as she spoke about horses and the role that they play in her life. He found himself floored by how much she loved what she was doing and jealous that he did not feel so strongly about his Violins. (I imagine they aren’t nearly as cuddly as a horse).

What Jenny discovered that night was that a passion for horses goes so far beyond a first impression. It reveals something much deeper. If the recipient of such information is paying close enough attention, they will feel that extra je ne sais quoi that makes Jenny who she is. They will see in the way her eyes light up that she knows some special secret that maybe one day she will share with them (if they are lucky). She may not be curing diseases or amassing a great fortune, but she is living a noble life by living with a joy that is contagious: the joy of the horse.