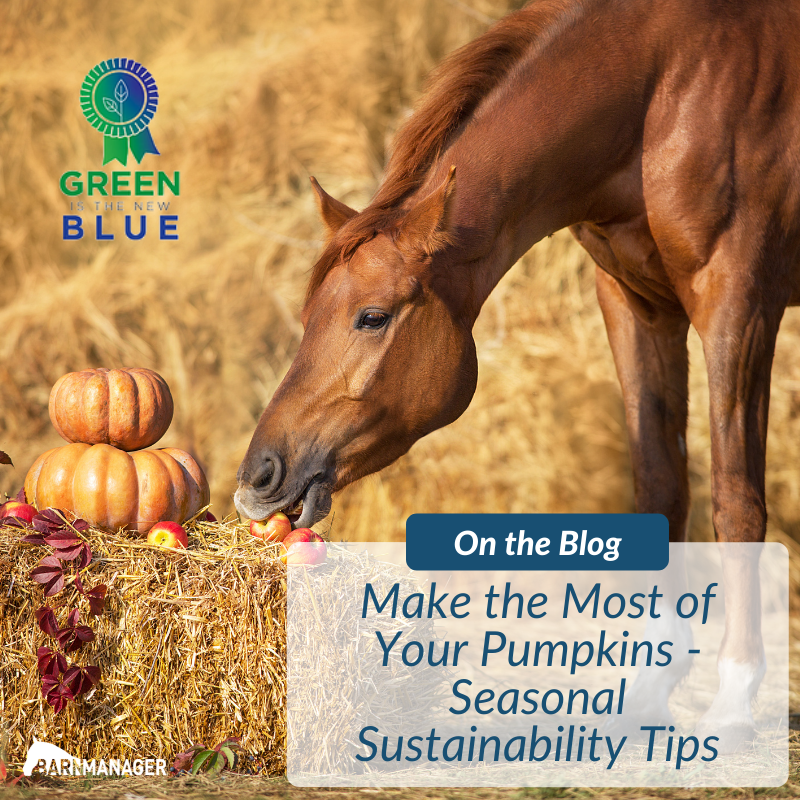 Make the Most of Your Pumpkins – Seasonal Sustainability Tips

November 18, 2021| Jennifer Wood| in category Uncategorized No comments yet

Make the Most of Your Pumpkins – Seasonal Sustainability Tips

Written by BarnManager partner Green Is the New Blue

Pumpkins are a fall favorite, appearing on the porches of homes across the country from the start of fall to Thanksgiving. In addition to their decorative purpose, pumpkins are a healthy ingredient in many recipes and make a great snack for a variety of animals.

Unfortunately, there’s a dark side to the Halloween craze. An estimated 1.3 billion pounds of pumpkin are discarded into U.S. landfills each year, accounting for 65% of pumpkins produced. Decomposing waste trapped in landfills produces methane gas, contributing to climate change.

Thankfully there are many other ways to make the most of your pumpkins or sustainably dispose of them.

‘Tis the Season for Pumpkin Spice

With Thanksgiving coming up, there are so many amazing recipes for you to make the most of your Halloween pumpkins. Besides the stalk, almost every part of the pumpkin is edible, and they are a great source of vitamins, containing little fat or calories. Bake the seeds or skin for a crunchy snack, boil and strain the guts for a soup broth, or use the flesh to create a puree for pies, lattes, or ice cream.

A Tasty Treat for Our Furry Friends

Did you know that orange pumpkins, including the seeds, are also safe for horses to eat? If you plan to feed it raw, make sure to cut it into small pieces to avoid choking. It is recommended to feed no more than one cup per day. Even better, there are plenty of recipes to bake your own dog and horse treats. Jar your treats and store them for a tasty pumpkin treat any time throughout the year.

Pumpkin spice may or may not be your favorite seasonal treat, but it sure is appreciated by farm animals and wildlife. If you have pumpkins you don’t want to cook, reach out to a local animal sanctuary to see if they are interested in donations. Pumpkin is an enticing snack for pigs, goats, sheep, and many species of birds like chicken and ducks. As always, do not feed farm animals without permission from the owner for the animal’s health and safety.

The next best option is to compost your pumpkin. Make sure to remove the seeds, or your compost pile may become a pumpkin patch next season. Whole pumpkins can take a long time to compost, so break it into a few pieces before tossing it in.

Green Is the New Blue would like to wish everyone a wonderful season heading into Thanksgiving. We are so thankful for all who follow us and help us strive for a Sustainable Sport. 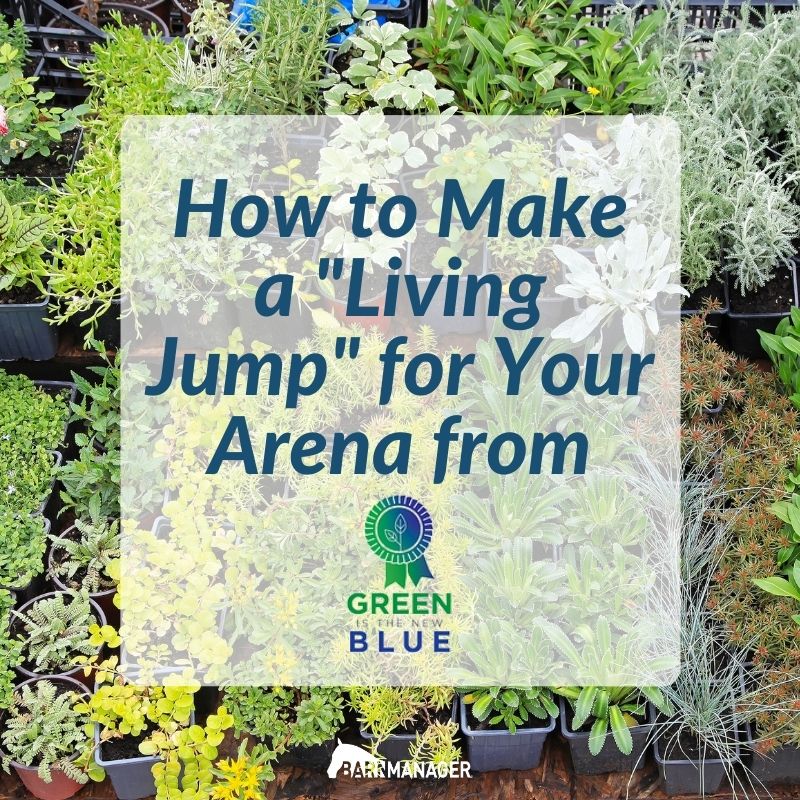 How to Create a “Living Jump” at Your Farm

February 12, 2021| Nicole Lakin| in category Uncategorized No comments yet

GINTB has two simple goals: to educate the equine industry about best practices for sustainability and ecological safety, and to provide the tools to make these changes easy and straight-forward to implement.

Founded by amateur rider Stephanie Bulger when she realized the detrimental impact horse events and venues had on the environment, GITNB is dedicated to reducing the environmental impact of horse shows and inspiring equestrians to do their part to live sustainably.

Look out for future pieces from Green Is the New Blue as we update you on more ways to go green in your barn!

How to create your living jump:

Green Is the New Blue has developed the concept of a “Living Jump” to promote biodiversity and support species that enhance ecosystem resilience. To build a Living Jump at your facility, all you need to do is source plants from a local nursery using native species that support pollinators and create habitats for other insects, such as ladybugs. Check out the steps below to see how to build your biodiverse jump course!

Biodiversity describes the overall variety of living things in the ecosystem, from microorganisms, to plants, to horses and their riders. Biodiversity is important because it provides us with vital resources such as food, water, shelter, medicine, and fuel. A biodiverse environment is also more resilient in the face of disaster. When equestrians source native plants within the course design and farm landscaping processes, they help to sustain local environments that, in turn, sustain human life. 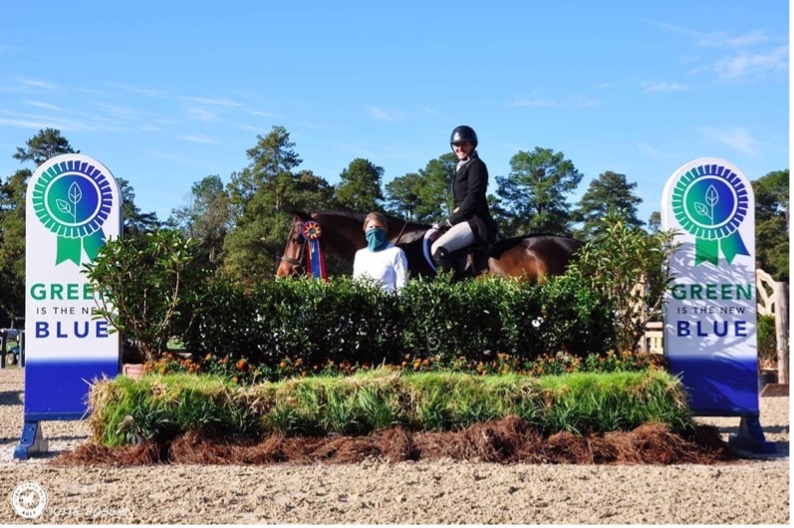 Native species are those that live in the same ecosystem where they originated. Non-native species are those that do not naturally occur in an area, such as Alberta Spruce in a Florida hunter ring (they look like miniature Christmas trees!). Some species are invasive, meaning they cause ecological harm as they exist in an environment where they did not originate. Try to choose native plants that provide habitat for a variety of other species, such as pollinators. We recommend using the National Wildlife Federation’s Native Plant Finder to be sure you’re including beneficial species.

2. Source plants from a local nursery.

Once you have identified a list of species to include in your Living Jump, coordinate with a local nursery for pickup. Just as you would support local businesses in other aspects of life, such as your local tack or feed store, it is important to source plants from local nurseries that provide biodiversity benefits to your local ecosystem. If the plants were not grown on site, local nurseries are more likely to know where and how the plants were initially grown. Additionally, plants are often healthier when they are sourced and cared for locally, as opposed to being transported in bulk to department stores.

3. Build your jump to fit your arena.

Time to get creative! Build up your Living Jump using your locally sourced, native plants. If you want more spook for your hunter derby mount, add more elements. If you want to tone it down, build it smaller with fewer varieties of plants. Even with smaller jumps, you can still include plenty of beneficial species around the ring. Decorate according to your needs for horse, rider, or equine facility. Add plants to in-gates, jump standards, below rails, and anywhere else around the ring.

It is important not to discard plants after they serve their purpose in the ring. With just a bit of research for each species, it’s possible to replant and harvest many species to use again next year. No space to replant? Consider gifting or returning them to a nursery or other facility that is better equipped to this. If you are hosting a single event, it is often possible to rent plants and return them later.

Once you’ve created your Living Jump, take lots of photos and spread the word on social media and with friends and family. When others see what you have created, you’ll inspire them to do the same, leading to more biodiversity among horse farms, increased business for local nurseries, and something pretty to have around the farm.