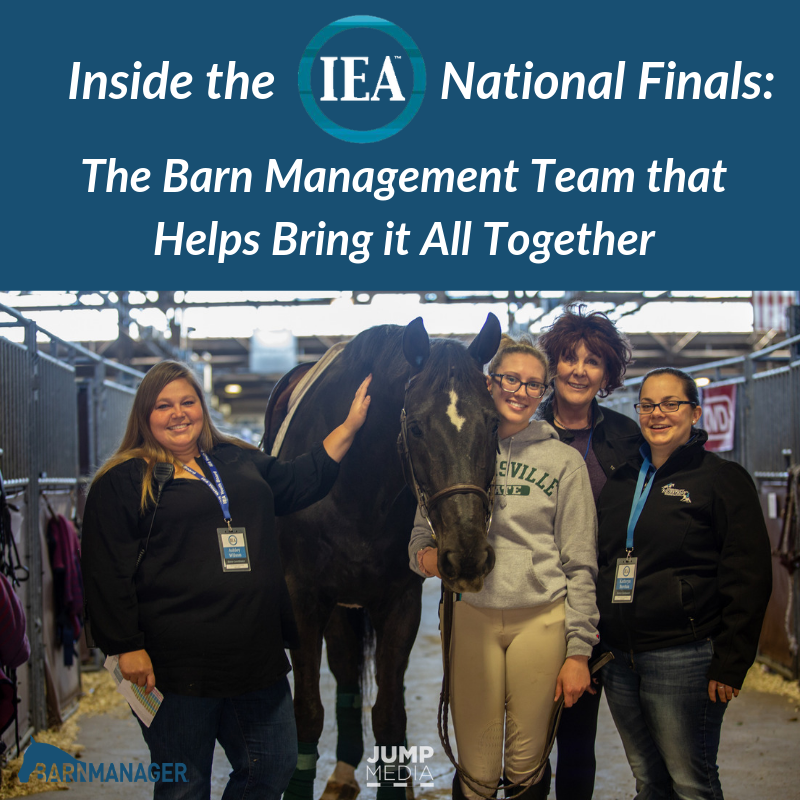 The Barn Management Team that Helps Bring it All Together

Riding in equestrian competitions of any discipline requires an important prerequisite: the actual horse on which to compete!

At most horse shows and events available to young riders, that means either owning a horse of their own or leasing one. Interscholastic Equestrian Association (IEA) shows, however, are an exception.

The organization, now open to students in grades four through 12, makes riding in hunt seat, western, and dressage competitions more accessible to many young riders, as competition horses are provided at all events. Competing riders show up to the event and randomly draw which horse they will be riding that day. For flat classes, they even enter the ring with no prior warm-up! 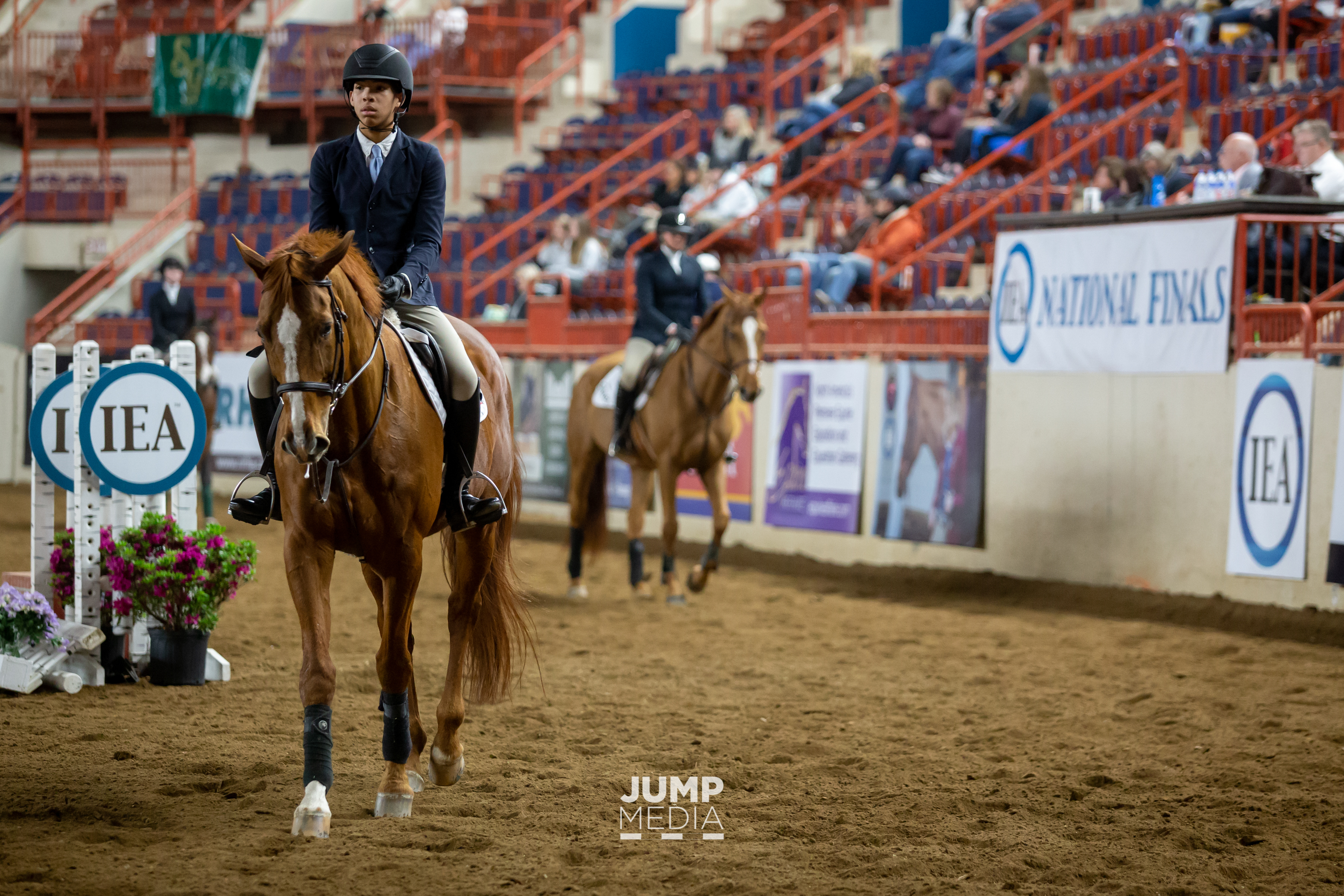 The IEA, now open to students in grades four through 12, makes riding in hunt seat, western, and dressage competitions more accessible to many young riders, as competition horses are provided at all events. Photo by Jump Media

But if the riders are not bringing all of their own horses, where do these magical, ready-to-show horses come from? And who is taking care of and managing them? And how do the riders know that the mount they are getting will be cooperative?

Our BarnManager team caught up with the barn manager and horse coordination team working seamlessly behind the scenes at the IEA Hunt Seat National Finals in Harrisburg, PA, on April 26-28, to learn more about what makes it all possible.

Here’s an inside look at the process, from months before the show to the moment that the last horse ships out of the show!

Before it All Begins

Several months before the first horse arrived at the IEA Hunt Seat National Finals, barn manager Simon Towns – who has worked for the IEA for 15 years – spent a lot of time on the phone.

Part of her role as the barn manager for the Hunt Seat National Finals each year is searching to find the horses that she will ultimately manage at the Finals, and that means placing numerous calls to horse owners within the IEA’s network and in the area surrounding the finals’ venue.

“This show is in April, so usually in January and February the initial calls are going out to people that you know just from having done it or from knowing the area,” explained Towns. “This [year’s Finals] happened to be in Zone 11, so we went to Zone 11 [in Pennsylvania and New Jersey] first, but we’ve also got some from New York, some from West Virginia.”

So that should be it than, right? The horses have all been acquired; their owners will bring them, and the IEA riders will pull a name from one of those 72, get on, and show! Not quite. This is where the management and coordination really begin!

Settling in at the Show

For this year’s Hunt Seat National Finals, the horses arrived on Wednesday and Thursday morning, where they were greeted by Towns and horse coordinators including Ashley Wilson of Concord, GA, and Kathryn Bordua of Manchester, CT. 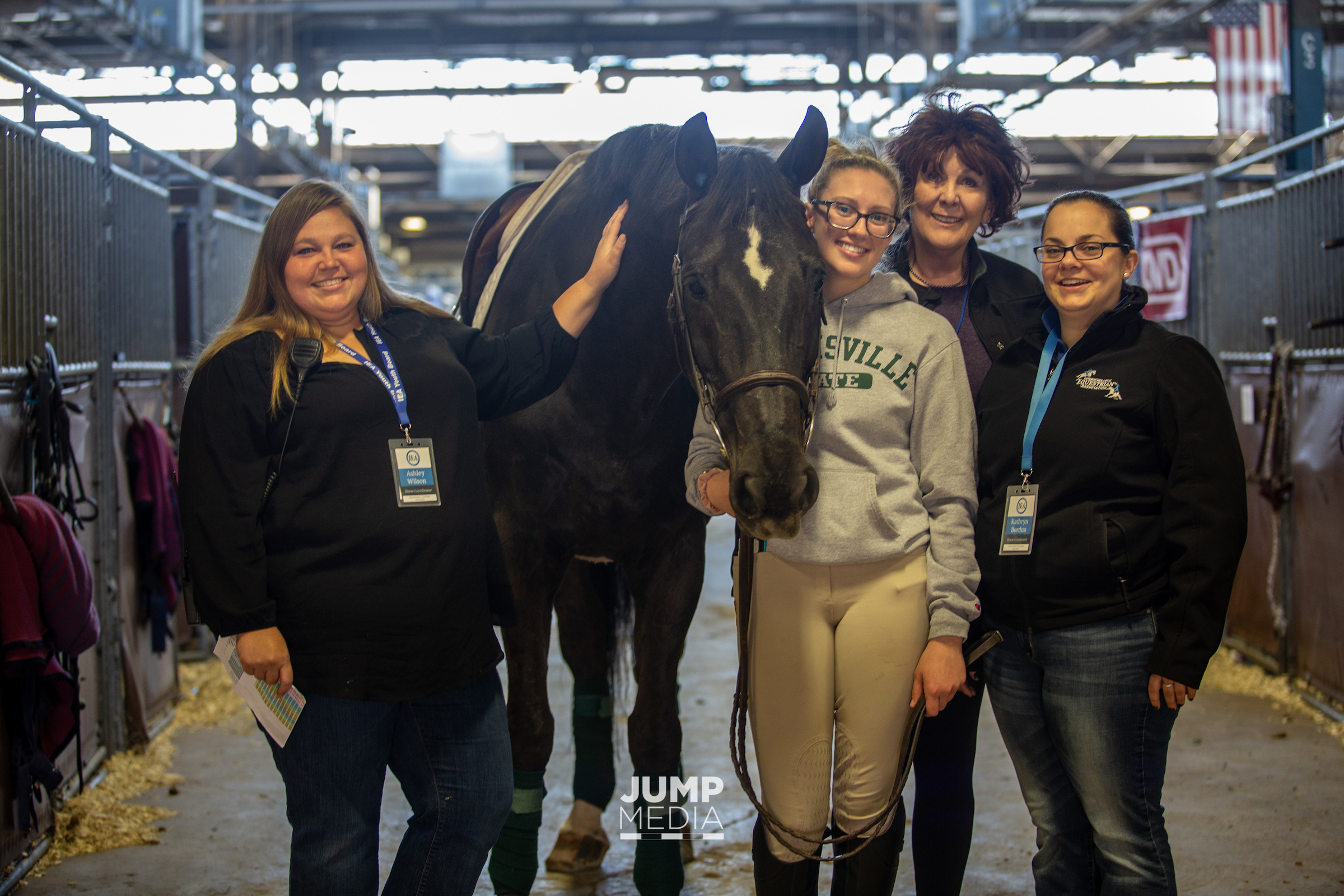 After being unloaded – on a shipping schedule coordinated by Towns and the horse coordination team – the horses are led to their stalls, which have already been completely set up and bedded with shavings by that same team.

“Simon does a lot of the pre-work, months ahead of the show, basically doing the barn format, how the stalls will be set up, how many providers need to go where, who’s working with who, who’s shipping in with who, organizing the shavings and things like that,” explained Bordua. “Then, Ashley comes in a couple of days ahead of time, and she and Simon work together to get the barn all set up.”

Once settled in their stalls, some of the horses come with owners or handlers to care for them, but others are generously donated for the weekend without a handler.

“At this show, we have some horses that were dropped off to us, so we do things like feeding in the morning,” said Wilson in describing the various hats that the barn management team wears throughout the weekend. “We actually pick stalls for a lot of them and fill waters. Sometimes you have a provider who will bring seven horses but have one person, so you help out there.”

Once the horses are situated, Thursday is a full day dedicated to schooling, and for Bordua, Towns, and Wilson, evaluating the horses.

While the horse providers supply background information on each horse, it is up to Bordua, Towns, and Wilson to assess what division, or divisions, each horse is best suited for – which is no easy task and one that continues to evolve throughout the show weekend.

“We watch the schooling with information on what the providers say that the horses can do,” said Towns. “Kathryn adjusts their duties appropriately within the show framework so that we can establish what we want the standards to be.” They divide the horses into Beginner, Novice, Intermediate, or Open divisions.

Bordua added, “I start by watching the horses go. I say to the horse provider, ‘Where do you want me to put this horse?’ They tell me. Then we decide their suitability and their level appropriateness. It’s a lot of watching them go around and saying, ‘We like this one over fences more, or I really like this one on the flat more. This one is better suited in Open because the playing field is more equitable that way.’

“You also don’t want to put the tiny little peanut pony in the class with the big warmbloods,” continued Bordua. 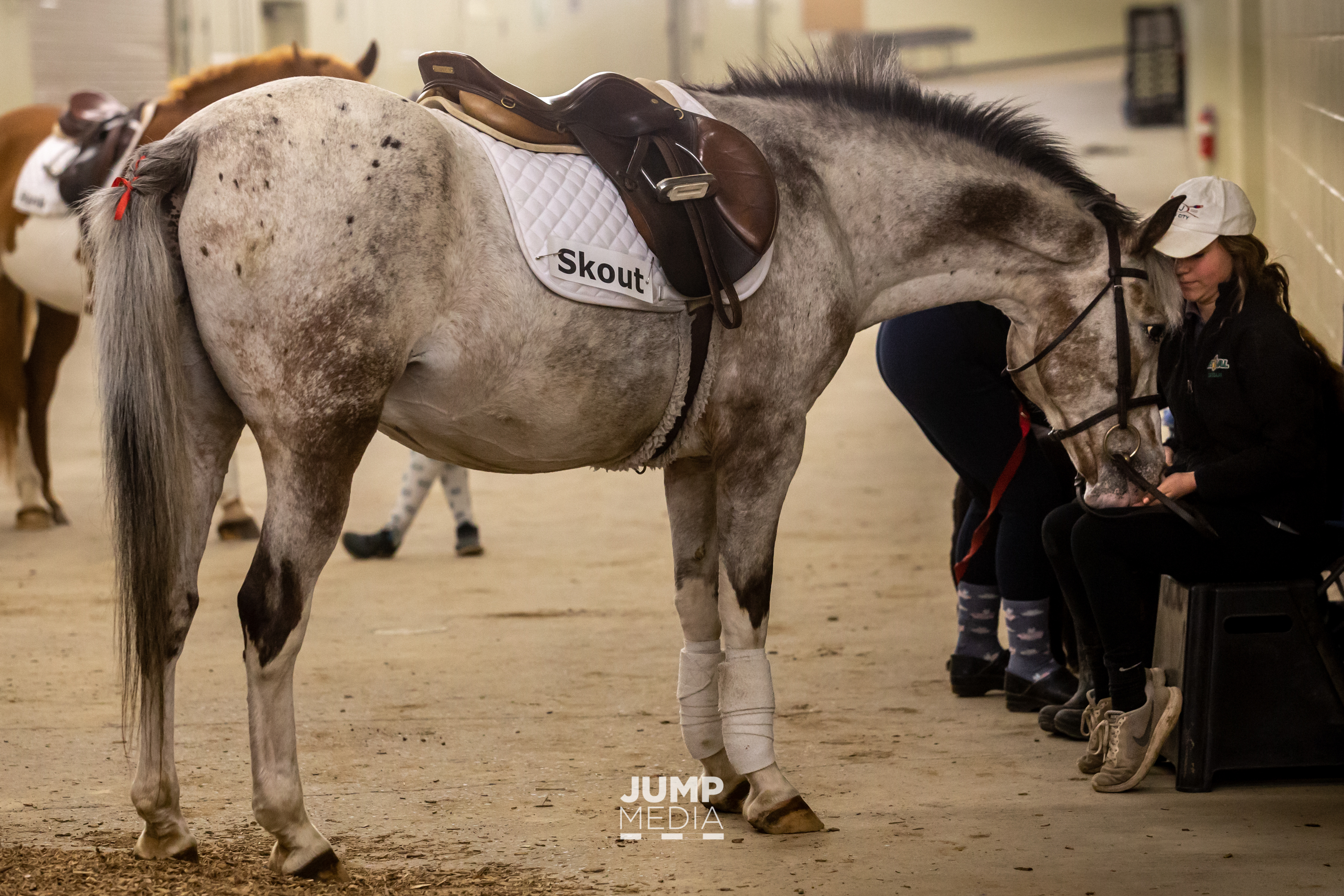 Skout, one of the adorable and well-behaved ponies used the IEA Hunt Seat National Finals. Photo by Jump Media

“When the coaches look at the class, they want to see what appears to be even competition,” added Towns.

After watching all of the horses go, Bordua and Wilson create a complex grid that details which horses will be used in what classes throughout the weekend, and the show begins! The start of the show, however, does not mean the end of the evaluating of the horses, and Bordua’s ongoing updates to the grid are frequent.

Wilson explained that the Open and Beginner levels were the most difficult to place horses in, as the Beginner horses need to be complacent with greener riders while the Open horses should have the ablility to let more experienced riders show off.  “You want the super fancy horses for the Open kids, but there are sharper edges to those horses,” continued Wilson. “Then the Beginner group has to go around and show well, but nothing is going to faze them. It’s just hard to find.

At the end of the day, Bordua, Towns, and Wilson want all the riders to have a fair and fun competition experience, but perhaps even more importantly, they want the same for the horses.

“Our job is also a lot of horsemanship,watching, and trying to assess a situation. I If we see the unraveling start to happen, we try to, at least for the horse’s sake, make sure that we make a decision before it actually becomes made for us,” said Bordua.

“We all have the same basic goal of making sure the horses and the kids are well-matched and used appropriately,” said Towns. “We all have that same philosophy.”

“We really have to think about the horses’ mentality and safety,” concluded Wilson. “We’re approaching the show from those 72 horses’ standpoints, instead of ‘Let’s see what the kids want or what the coaches want.’ Our side is, ‘What is going to make the horses happy and comfortable?’”

Learn more about the IEA by visiting www.rideiea.org.