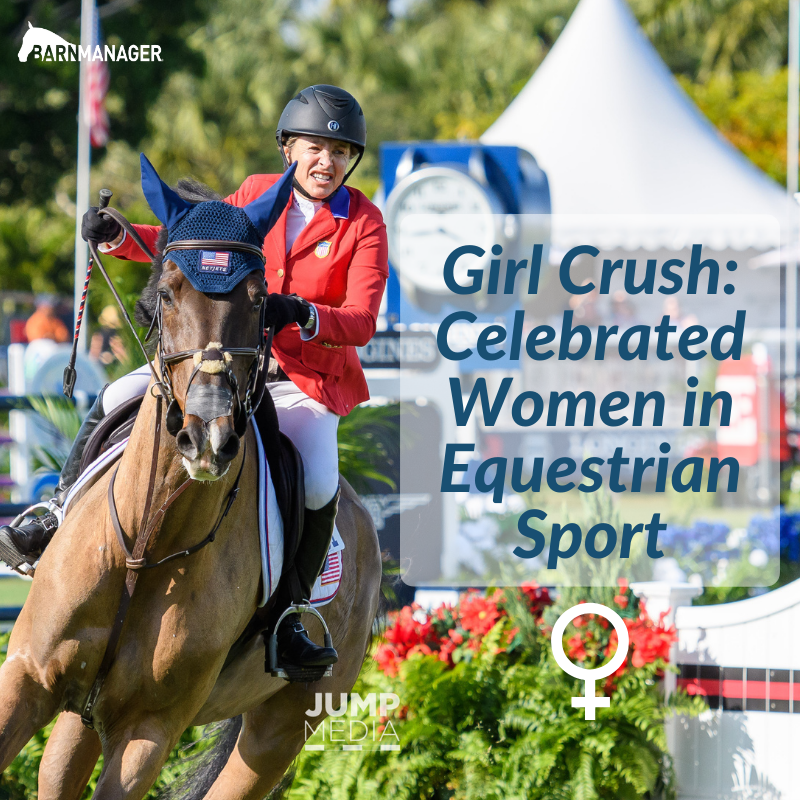 Equestrian sports are unique in many ways, but one of the most significant aspects that sets it apart from other sports is that men and women compete against one another on an equal playing field. March is Women’s History Month, and this past Monday, March 8, was International Women’s Day, and though we admire and celebrate women every day of every month of the year, BarnManager recognizes a few women in equestrian sport accomplishing impressive feats and leading awe-inspiring careers.

We can’t think of women in equestrian sports without Margie Engle coming to mind. She has been at the top of her game for longer than many current athletes have been alive. She’s got enough grit to supply a whole football team, and her passion and talent have scored her some impressive wins on stages both national and international. She’s medaled at the Pan American Games, competed at the Olympics, and been named American Grand Prix Association Rider of the Year 10 times. At nearly 63 years old, she’s still winning top grands prix and ranked among the top 40 riders in the world.

Show jumpers know there is nothing Beezie Madden cannot do. She was the first woman to earn $1 million in prize money and to reach the top three in the FEI World Rankings for show jumping, and she also won two FEI World Cup Finals, just to name a few of her many achievements. She competed on two Olympic gold medal U.S. teams and one silver medal team. Madden also earned an individual Olympic silver medal and individual bronze medal at the FEI World Equestrian Games. She’s always one to watch no matter who she’s riding. Young girls at all levels of the sport absolutely adore having her as a role model as they chase their equestrian dreams. She’s endlessly devoted to the horses, and you can tell her horses love working for her and jumping clear rounds.

German eventer Ingrid Klimke has claimed two gold medals and one silver in her Olympic appearances for Germany. She rides internationally in both eventing and dressage. She earned the title of Reitmeister, an honor given by the German Equestrian Federation, becoming only the second woman to earn the title. She’s topped European Championships individually and as part of the German team. She also took home FEI World Equestrian Games gold medals for her home nation. Eventing is truly a sport of riding mastery, as the riders must be versatile enough to excel in three disciplines during the course of the same event. Ingrid Klimke rose to the top and set herself as the ultimate example of success for aspiring eventers.

Liz Halliday-Sharp is not only an admirable horsewoman, but she also broke barriers in another sport as a woman. She is an international three-day eventer at the CCI5* level where she’s seen success across the United States and Europe. She has also spent time as a professional driver in sportscar and endurance racing disciplines. Halliday-Sharp clearly has a need for speed as she has seen top results in both avenues of her career. She’s represented the United States on Nations Cup teams, at the FEI World Equestrian Games, and the Pan American Games, and has her eye set on the Olympics for 2021.

Laura Graves was the first American dressage rider to be ranked number one in the FEI World Rankings. She had an incredible dressage career aboard her longtime mount, Verdades. She has represented the United States in the Olympics and the World Equestrian Games. At both, she has taken home team and individual medals. She also won gold at the Pan American Games and was runner-up at the FEI World Cup Finals three consecutive times. Watching Laura with Verdades is like watching pure magic.

German dressage rider Isabel Werth holds the record for most Olympic medals won by an equestrian athlete, with six gold and 10 in total from five appearances at the Olympic Games. Furthermore, she took the gold at multiple European Championships, FEI World Equestrian Games, and FEI World Cup Finals. She currently holds the number one spot in the FEI World Rankings for dressage. She is known as the most successful German dressage rider of all time. Watching her on any horse is awe-inspiring, and women globally admire her ability to connect with the horses on a level rarely seen.

Comment below with a female equestrian who inspires you!