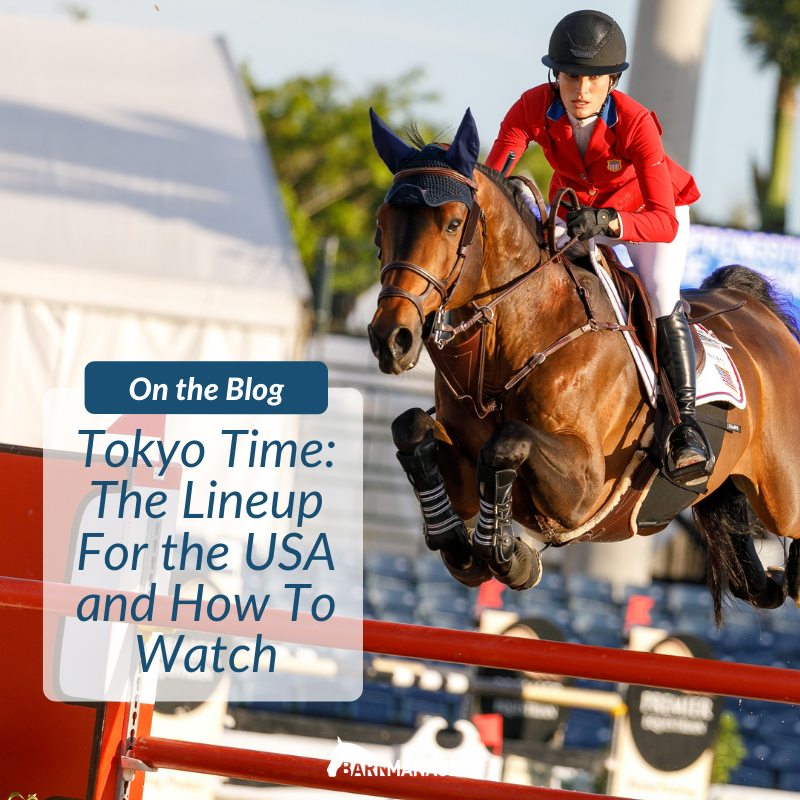 Time For Tokyo: The Lineup For the USA and How To Watch

July 22, 2021| Nicole Lakin| in category Uncategorized No comments yet

We are just a few days away from the much awaited 2020 Summer Olympics in Tokyo. The United States is fortunate to have four equestrian teams representing the country in Tokyo, including an eventing, dressage, show jumping, and para dressage team.

The teams have taken the necessary steps to arrive in Tokyo through mandated pre-quarantine processes due to COVID-19 protocols. The dressage team has arrived in Tokyo as they prepare to begin competition this Saturday. The eventing team completed their pre-quarantine in Aachen, Germany, trailered to Belgium, then took flight to Tokyo. And the jumping team is beginning preparations for their trip to Japan as well. Let’s take a look at who will be representing the United States in the upcoming weeks and how to watch these teams from home. See the full schedule via the USET Foundation here.

Adrienne Lyle and Salvino, Steffen Peters and Suppenkasper, and Sabine Schut-Kery and Sanceo were selected to represent the United States in Tokyo. Nick Wagman and Don John are the traveling reserve for the dressage team. The team is led by Chef d’Equipe Debbie McDonald and Team Leader Hallye Griffin.

Dressage at the Olympic Games will take place from July 24-28 through multiple Grand Prix team and individual events.

Boyd Martin and Tseterleg, Phillip Dutton and Z, Liz Halliday-Sharp and Deniro Z were the original eventing team to be selected. But after the mandatory outing at Great Meadows in Virginia, Halliday-Sharp decided to withdraw Deniro Z from the lineup after consulting with the team vets. Doug Payne and Vandiver stepped up to fill their spot and Tamie Smith and Mai Baum were named as the traveling reserve.

McLain Ward and Contagious, Laura Kraut and Baloutinue, Kent Farrington and Gazelle, and Jessica Springsteen and Don Juan van de Donkhoeve are the athletes selected for the jumping team. One pair will be named the traveling reserve.

Leading the team is Chef d’Equipe Robert Ridland and Team Leader Lizzy Chesson. Two alternates will join the team in the event one of the athletes needs to withdraw, which are Brian Moggre and Lucy Deslauriers.

Beatrice de Lavalette and Clarc, Rebecca Hart and El Corona Texel, Kate Shoemaker and Solitaer 40, and Roxanne Trunnell and Dolton will be representing Team USA. Two other combinations were nominated as team alternates: Sydney Collier and All in One, and Charlotte Merle-Smith and Guata.

Following the individual tests on August 27 at the Paralympic Games, three combinations will be selected to compete in the team competition.

The Paralympic equestrian competition is set to take place August 28-30 at the Equestrian Park venue in Tokyo, Japan.

It’s going to be an exciting few weeks of Olympic competition and we’ve been waiting five years for it, so be sure you know when your favorite athletes are competing so you can tune in and watch! BarnManager wishes the best of luck to all athletes across all disciplines competing at the Olympic Games in Tokyo.