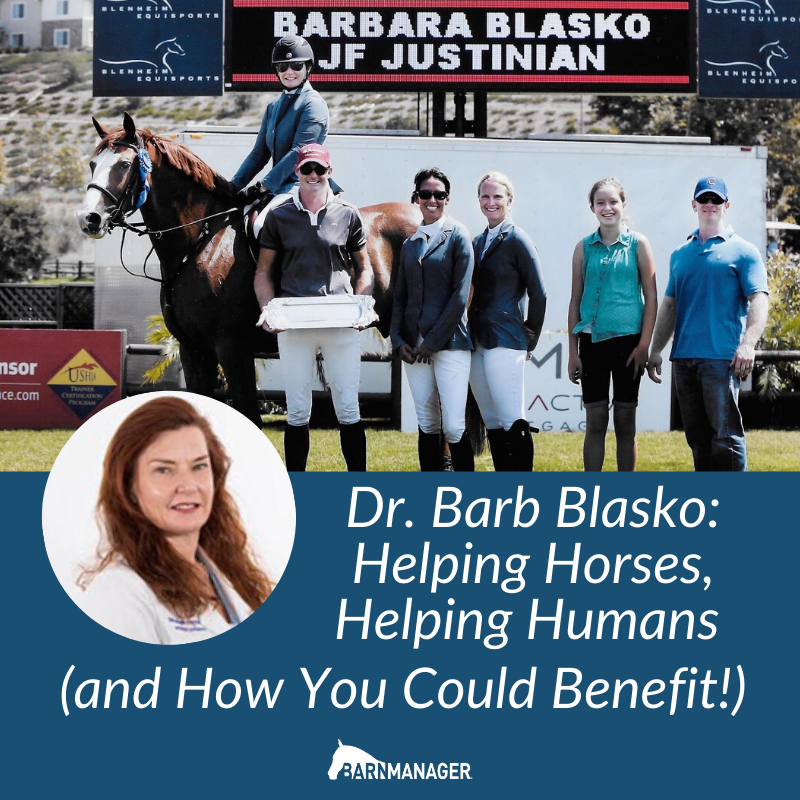 Dr. Barb Blasko: Helping Horses, Helping Humans (and How You Could Benefit!)

April 16, 2020| Emily Riden| in category Tips and Tricks No comments yet

Dr. Barbara J. Blasko, M.D. was traveling home from the East Coast when the medical records of her horse, competing on the West Coast, were lost prior to a show.

“They lost his medical records, so before he could get onto the show grounds, they revaccinated him,” recounted Blasko. “I was flying on a plane, and no one could get ahold of me. This horse was super sensitive; he had a really bad reaction and got very sick.”

That incident in 2013 led Blasko to recognize a need within the equestrian industry, and it sparked an idea for the board-certified emergency medicine physician, newly armed with a degree in biomedical informatics. A year later, Blasko launched Electronic Vet, making electronic vaccination records accessible by owners and show managers and eliminating the need for paper records.

Today, Blasko is practicing medicine on the front lines of the coronavirus pandemic in California, and she has recognized another need. 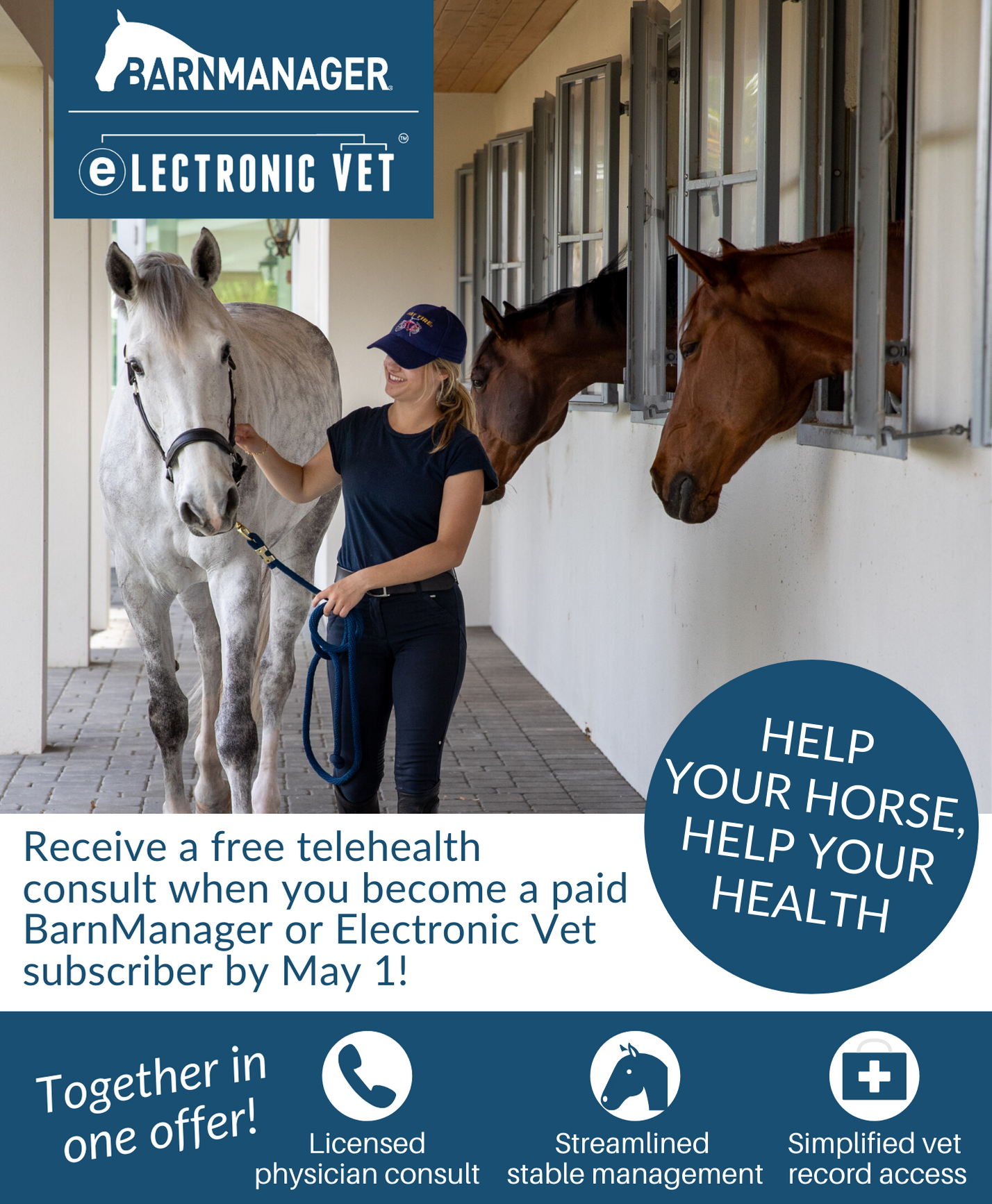 “In this time when people can’t go to their doctor, there’s a great need for telehealth,” explained Blasko, who has been practicing telemedicine since 2013. “I’ve worked with some of the first companies that were involved in telehealth, and I think it’s a great way to help people.”

With that in mind, Blasko decided she wanted to bring telehealth to equestrians during the coronavirus pandemic, and she approached BarnManager’s founder and chief executive officer Nicole Lakin with an idea.

“I wanted to offer people another way to get medical advice and treatment without having to leave their house,” said Blasko. “I know that Nicole and I share similar visions and missions, and we both want to help equestrians find solutions to their problems, so I came to her with the idea of offering telehealth consults to both BarnManager and Electronic Vet subscribers.”

Lakin agreed that the opportunity to collaborate was a perfect fit, and now, any paid subscribers who sign up for either Electronic Vet or BarnManager before May 1 will also receive a free telehealth consultation with Blasko.

Through a telehealth consultation, Blasko is able to address issues such as infections, asthma, cold and flu, sore throat, rash, sinusitis, ear pain, and more. She is also able to address COVID-19 questions or concerns and to provide certain prescriptions or medication refills. 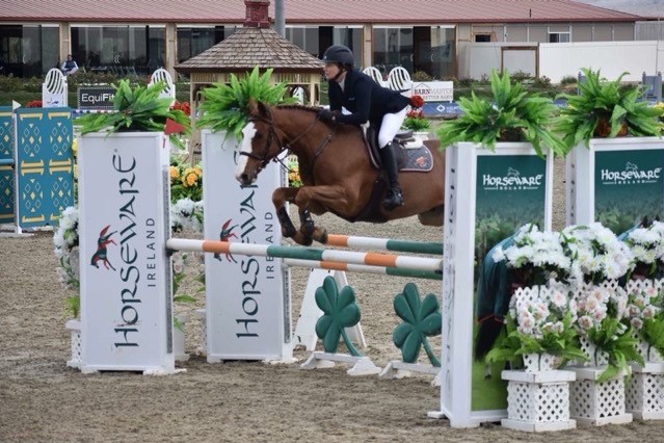 For equestrians hesitant about the idea of discussing their health or medical concerns over the phone with a relative stranger, there may be comfort in knowing that Blasko is much like them.

Before she was Dr. Barbara Blasko, M.D., Blasko was a horse-crazy kid growing up in Long Island, NY.

A $1 pony ride at a fair sparked her ongoing love of the animals, and she began taking lessons at the age of 8. When she was 14, her parents bought Blasko her first horse, an Appendix Quarter Horse named Myrtle.

“I started doing the ‘B’ show circuit on Long Island and the equitation,” said Blasko. “I worked for some trainers on Long Island as a groom and a braider to pay for my horse expenses. I didn’t have my own horse in college; it was just too expensive, but I did ride others’ horses, and I kept braiding and grooming in college and in medical school. That kept me sane during my studies.”

Today, while Blasko lives in California, she trains with Peter Petschenig out of Pilot Point, TX, where a few of her horses, including her jumper and a grand prix mount purchased for Petschenig, now reside.

“Peter moved to Texas, so he’s there with my jumper, and I’m fortunate to have a retired jumper that I keep here and do mostly dressage with,” explained Blasko, who aims to ride at least four days a week, frequently flying to Texas to ride her jumper and train with Petschenig.

“Honestly, horses have just been the piece of my life that allows me to focus on the rest of my life and my career,” said Blasko. “It’s my outlet.”

As a young teen, Blasko first began to see horses as such an outlet when her mom was diagnosed with lung cancer. It was that experience that also ignited another interest in Blasko.

“Seeing her have to be treated and have surgery and interacting with her doctors really made me want to become a physician and help people,” said Blasko, who was 14 at the time. “I wanted to help others that had similar illnesses to my mom and see if I could make their lives a little better.” 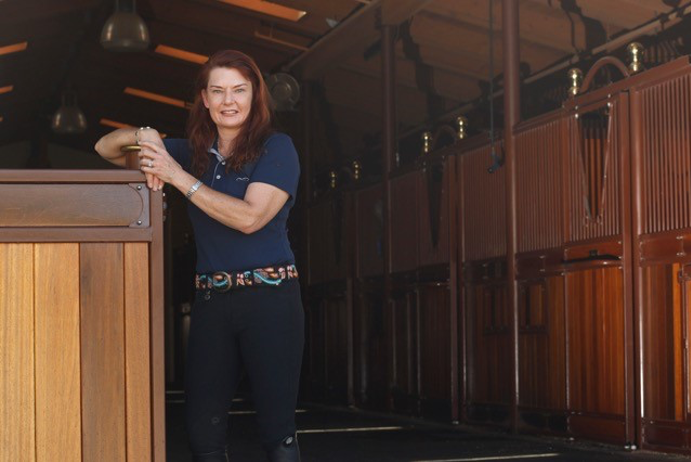 While working for Kaiser Permanente in California, Blasko helped the organization make the huge transition from paper documentation to electronic health records.

“I became interested in health care technology, and I went back to school and got a degree in biomedical informatics, which is basically electronic health care delivery,” said Blasko. “I was involved in a lot of workflow design, physician champion committees, and in teaching other doctors how to use the electronic record.”

It was about that time that the issue with her horse’s vaccination records occurred, and Blasko knew that there was an easier way to do things.

“That was around the time that vaccines were becoming mandatory for competition, and I noticed that there were a lot of problems with paper records,” explained Blasko. “I founded Electronic Vet to make a cloud-based platform where all of the records could be housed electronically, and everyone could have access to them online.”

The cloud-based eVet Certificate includes horse and owner information, as well as the vaccines/test results/Coggins on file. The eVet Certificate can be exported and emailed from the owner/trainer’s account directly to the horse show office or provided instantly to participating show offices in the U.S. and Canada via eVet’s innovative technology partnerships.

“Having the ability to do your vaccine record digitally is one less thing to worry about when you have to get to the horse show,” said Blakso, who has partnered with a number of show managers to make their customers’ vaccine records accessible on Electronic Vet. “Basically, when our clients get to the horse show, the vaccine records are already there. They don’t have to hand a piece of paper to the show secretaries. We’ve also partnered with online entry companies so that when you create your online entry, you also create your vaccine certificate, and everything gets sent into the horse show directly.”

Managing Electronic Vet in addition to her full-time career is a balancing act for Blasko, but knowing that she can provide benefits to others while doing what she most enjoys makes it a labor of love.

“I feel so lucky that I can help people,” said Blasko. “Combining all of my passions has been amazing, and that’s similar to the idea behind offering free telehealth consults with eVet or BarnManager subscriptions. We’re combining the opportunity to help both horse and human, particularly during this difficult time.”

To learn more about Electronic Vet and to start your subscription, visit www.electronicvet.com. To begin a BarnManager subscription, click here. All new subscriptions receive a telehealth consultation with Dr. Barbara Blasko, MD, to be used within 60 days of subscription sign-up.