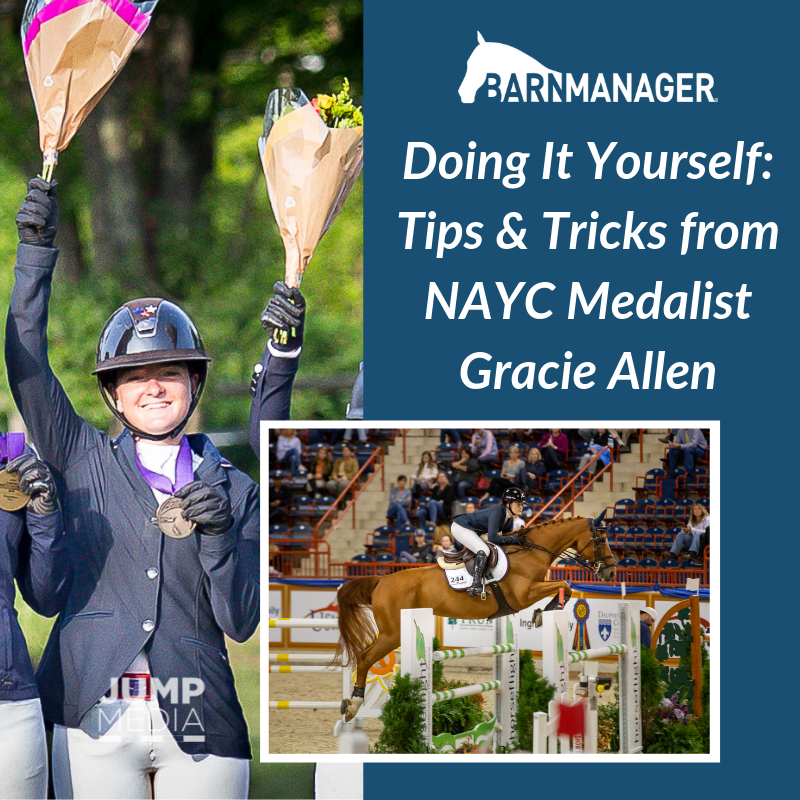 Doing It Yourself: Tips and Tricks from NAYC Medalist Gracie Allen

August 16, 2019| Emily Riden| in category Tips and Tricks No comments yet

Gracie Allen helped Zone 2 claim the Young Rider team bronze medal at the North American Youth Championships (NAYC) on August 2, before she was also presented with the Style of Riding Award.

Even without her well-earned medal and award though, Gracie would have still been a winner in our books!

While the majority of competitors at the NAYC have the assistance of a groom or trainer to care for their horse, Gracie is a standout. The 18-year-old from Moorestown, NJ, is largely the sole caretaker for her medal-winning mount, Rivage de Lormay. Gracie has had the ride on the 14-year-old Selle Francais gelding, owned by Horseware Ireland, for the last year and a half, during which time the gelding has lived at home with Gracie at her family’s Woodedge Farm in Moorestown, NJ.

Gracie says, “I take care of him and prepare him for competition, and that allows me to really get the best out of him in the ring. I know him like the back of my hand, so it really allows me to know what’s going on with him. If he even looks at me funny, I know there’s something wrong.

“I feel like he knows me really well, so it plays a huge role for us,” continued Gracie. “I know that whatever success I have in the ring is because of the effort I’ve put in with him.” 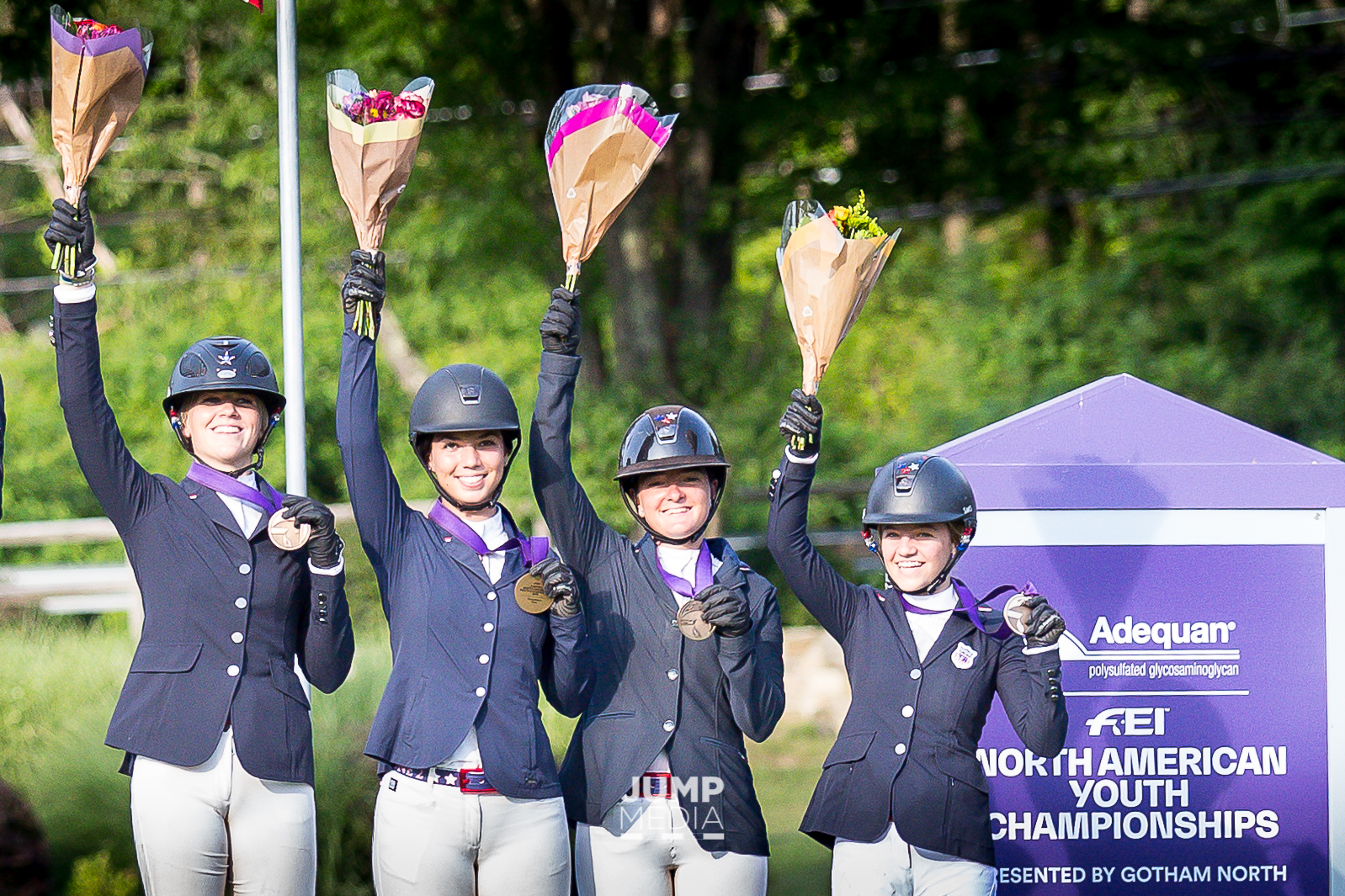 Gracie Allen (second from right) with her Zone 2 teammates after claiming the Young Rider team bronze medal at the 2019 North American Youth Championships in August. Photo by Jump Media

Caring for Rivage de Lormay herself has not only helped their partnership in the ring, it has made Gracie quite the knowledgeable horse woman.

Couple that with pointers and expertise from her riding instructor parents, Bob and Maureen Allen, and lessons from Olympian Anne Kursinski, and Gracie has garnered quite a few tips and tricks!

“I started taking lessons with [Anne Kursinski] when I was 14,” said Gracie, who then spent a summer as a working student for Anne and now lessons with her on occasion. “Anne’s very big on horse management; it’s a big part of her operation. I worked as a groom and a working student for her for a while when I was a junior, and it was an invaluable experience for me. I wouldn’t trade that for the world. It really gave me insight into how to take care of my horses. My parents teach beginner lessons, which is a wonderful part of our industry, but being able to be there with Anne and see her system and how she does everything was incredible.”

Here’s a bit of what Gracie had to share!

On preparing for and competing at the NAYC:

“It definitely gives me a big sense of pride taking care of him myself, especially coming here [to NAYC]. I really planned my show schedule around this competition, and it’s been a really big goal for me. To be able to come here and medal is a big accomplishment for me. When I do go in the ring and do well, I know that all of that is because of the hard work that I’ve put on, along with my parents and everyone who helps and supports me.

I came into these championships thinking that this was an opportunity that I really had to take advantage of because I don’t own any of my horses myself, so I don’t always know what the future is going to hold. I’ve been riding him twice a day to get him fit, and I’ve been feeding him every meal to make sure everything is completely compliant with [Fédération Equestre Internationale (FEI)] rules.

“I used the FEI database a LOT. My horse’s feed has about 25 different ingredients, and I was typing them all in. We have a lot of boarders, and if anyone sprayed anything near him or tried to feed him anything, I would have to keep an eye out for that. I was feeding him every meal and turning him in and out and making sure no one touched him. We had a day camp at the farm, with little kids, and I had to make sure they knew not touch him too! It was a little stressful getting ready for it, but now that I’ve done it and I know what I can and can’t use [under FEI rules], it’ll be easier next time.”

“I always work on time management. That’s something I learned when I was working as a working student for Anne. I think drying a horse’s legs is very important, and we have a lot of fans in the barn so the horses can dry faster. It saves you time to put a fan on them after they have a bath or you wash their legs.” 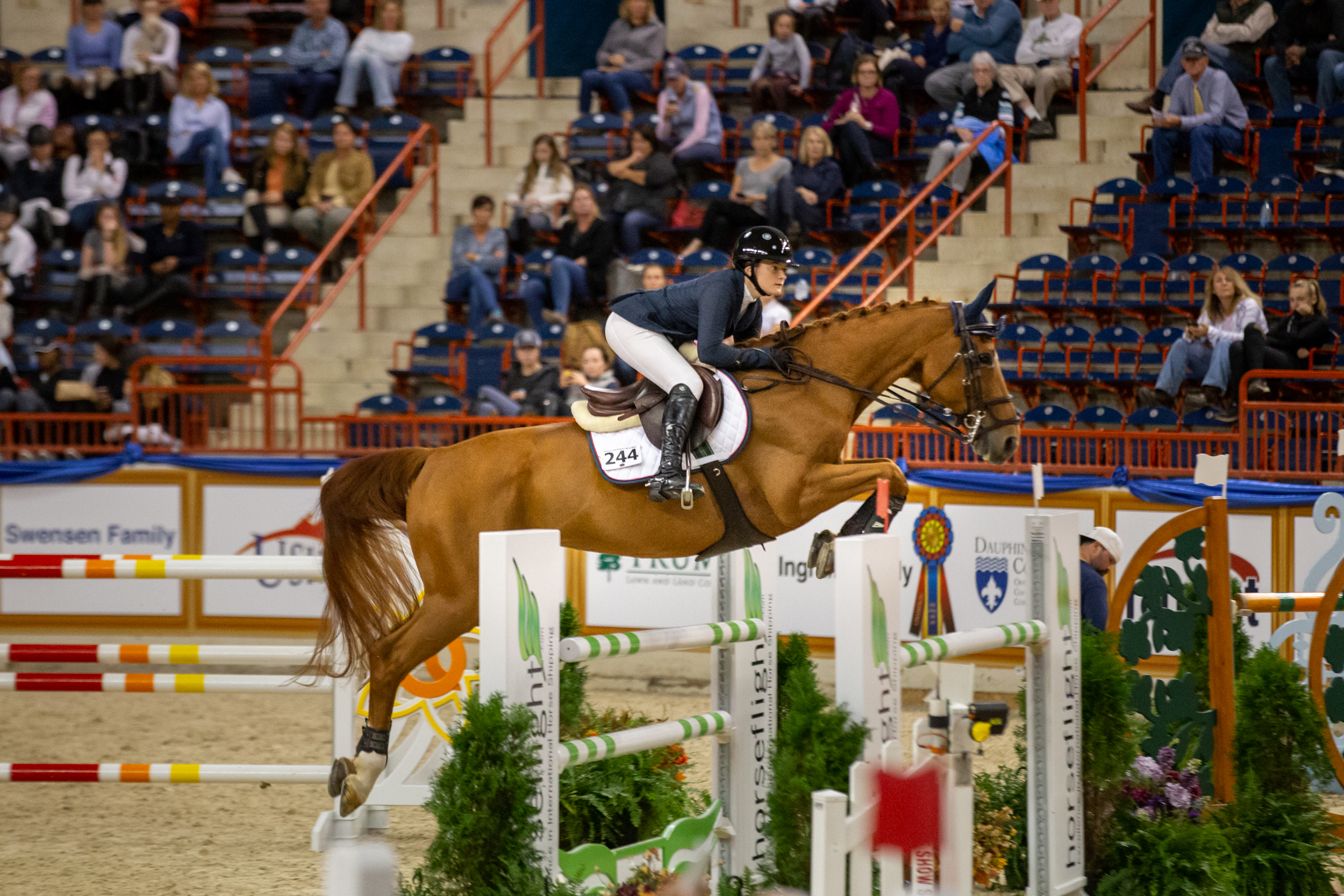 On organizing her day:

“My main philosophy is to make everything simple. I tell myself that all the time on the way to the ring: ‘This is simple.’

“I really try to organize things very well for myself. When we’re at a show and I have multiple horses, sometimes the days can get really packed. I have to make sure I’m organized, and I know where I have to be and when. Being organized and making everything as simple as possible, not only for me, but also for my parents when they have to help me take care of my horses, is so important. They have to know where everything is and who goes when.”

On what she never goes to the ring without:

We look forward to seeing what the future holds for Gracie!