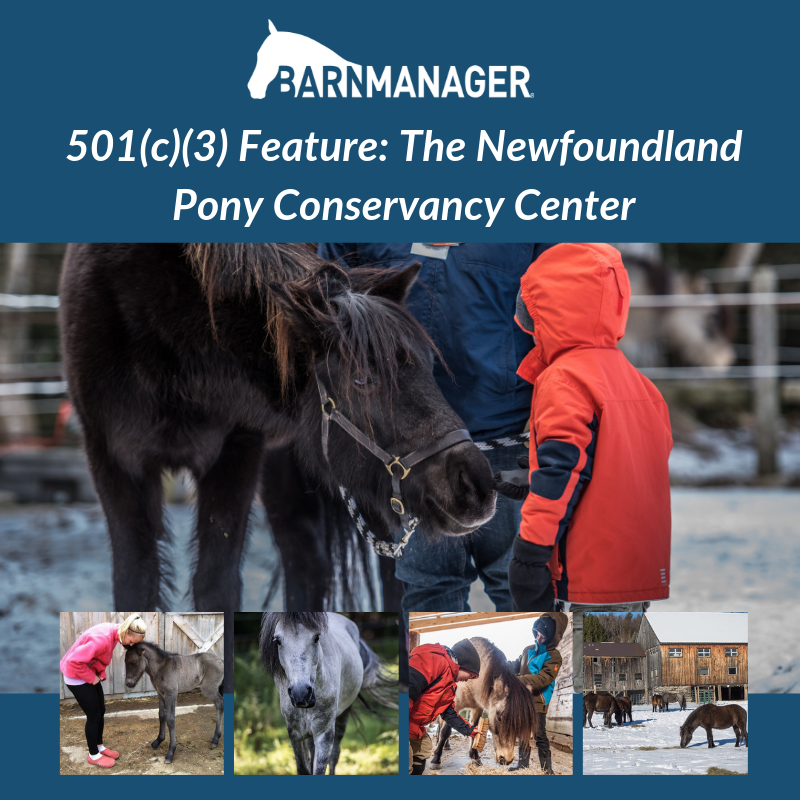 New Hampshire native Emily Aho had just purchased her third pony when she received a call from a woman in Michigan.

“She said, ‘Do you know what you have?’ I said, ‘Yeah, they’re Newfoundland Ponies!’” said Aho, who had acquired her first pony, a Newfoundland cross, strictly as a pasture companion for her Clydesdale cross, not knowing much about the Newfoundland breed. “She said, ‘They’re extremely rare, and you need to breed them!’ I thought, ‘What!? Breed? Me?!’”

Aho knew her ponies were special; that’s why she ended up with three ponies from the same family after only intending to purchase one! However, what she didn’t know at the time was that the Newfoundland Ponies are what are considered an original “landrace breed” – and that there are less than 40 Newfoundland Ponies in the United States and a global population of well under 1,000 ponies. 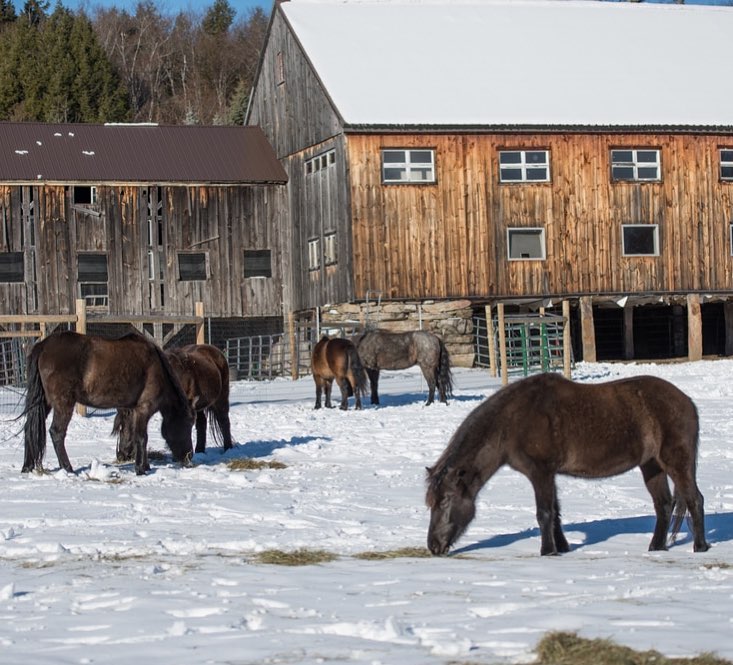 The Newfoundland Pony breed is one made hardy thanks to the pony’s native environment in northeastern Canada.

Upon learning this, Aho knew she had to do something, and in January of 2013, the Newfoundland Pony Conservancy Center (formerly Villi Poni Farm) was born.

“[My first] little pony stole my heart,” said Aho. “She was just amazing. The connection between her and anyone, actually, was just different than I’d experienced before. It’s very hard to describe.

“We decided that the best way to save this breed was to bring awareness about them and let people meet them,” continued Aho. “I could tell you about them all day long, but until you actually experience what they’re like, you won’t get it. People say, ‘I had a (certain breed) horse that was wonderful and good with kids.’  But when 99 percent of a breed are that way, like the Newfoundland Pony is, it’s mind-boggling. So, we formed the sanctuary. It’s grown and grown.”

Today, Aho and the Newfoundland Pony Conservancy Center act as stewards of the endangered breed through selective breeding and educational efforts. 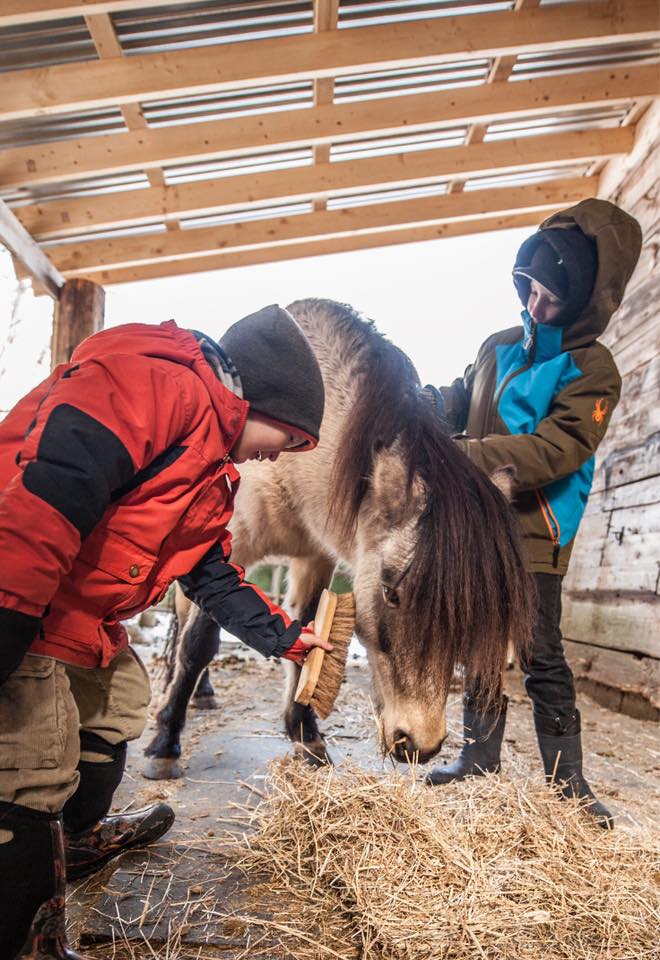 Part of the Newfoundland Pony Conservancy Center’s mission is educating others about the breed.

“Almost all breeds, including types of plants, are traced back to landraces that we’ve taken and adapted for our purposes,” explained Aho of how she immersed herself in learning more about the Newfoundland Ponies. “Nature makes their genetics hardy and able to withstand environmental and biological change, and they’re healthy. We as people; we can’t do that. We can’t say, ‘Okay, this one is going to survive this disease or this type of weather change.’ We look at what’s measurable. What’s measurable is their appearance, their usage, their size and ability, for instance. We can’t see the inside of what we’ve created; we don’t create them with the sole purpose being survival like nature does. So over time as we select out genetics/certain traits, we ultimately weaken species. Never having been “‘improved” or having their breeding altered for one purpose or another, the Newfoundland Pony doesn’t have a single genetic problem.”

“We don’t want to keep all of these ponies here,” said Aho. “Some of them are permanent residents, but others, we take them into our network. They go to breeding conservation homes that we have mentored and taught about the breed. The concept is that they breed registered ponies to registered ponies only, no irresponsible breeding. If that happens, we pull the animal, and that’s in our contract. We’re very serious about that.”

Presently, there are nine ponies living onsite at the 501(c)(3) rescue’s base in Jaffrey, NH, while there are 22 total ponies under the Conservancy’s program. The additional ponies all reside in adoptive homes within a two-hour radius of Jaffrey, NH, and with approved owners that have received mentorship and education on the ponies, their heritage, their care, and the best conservation breeding practices. Once they’ve undergone mentorship, new adoptive owners are considered “Breed Stewards,” continuing the work of the Newfoundland Pony Conservancy Center and becoming a part of the organization’s network of conservation breeders who help one another. 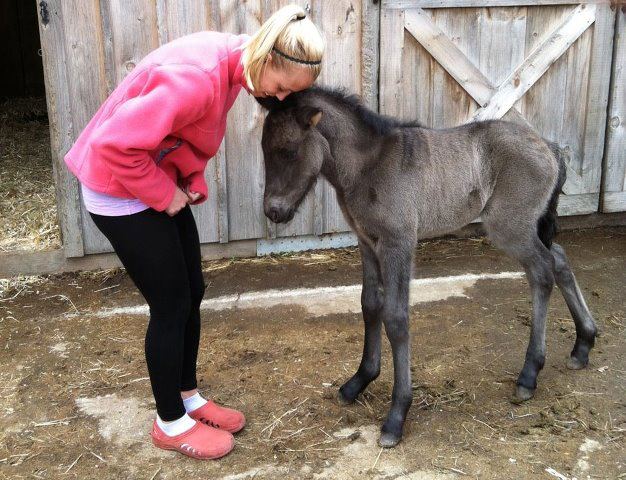 With less than 40 Newfoundland Ponies currently in the U.S., the Newfoundland Pony Conservancy Center is committed to continuing to grow the endangered breed through careful breeding.

“We’re all volunteers,” said Aho, a nurse by trade who serves as the non-profit’s executive director alongside five total board members. “All of our foster homes – everybody’s involved. We all stay connected together. We have quite a little network going and some really impressive people involved. We have loads of volunteers. It’s wonderful; they’re great people. We take people as volunteers that don’t know anything about horses, and we teach them. They’re a good pony to learn on!”

The Newfoundland Pony Conservancy Center also offers educational tours to the public to further spread knowledge about the ponies and equine welfare in general, as well as providing Equine-Assisted Learning (EAL) programs.

With so much going on, Aho was thankful to have found BarnManager!

“It’s incredible. I’ve never been so excited about a program in my life!” said Aho of BarnManager. “Just recently, it helped me in the greatest way!”

Due to a scheduling error, a veterinarian arrived somewhat unexpectedly to look at a filly while Aho was at work. The horse needed a health certificate in order to travel across state borders, but Aho had not planned on the vet visiting and did not have any of the horse’s necessary coggins and paperwork records prepared at the barn.

“I went into my phone at work, and there [the coggins] was!” said Aho. “I had downloaded everything in BarnManager, so I messaged it to him right then and there. It was amazing!

“It has helped immensely,” continued Aho. “It’s so great that I know who and when they had their hooves trimmed, or dewormed, etc – otherwise it’s hard to keep track of, especially when you’re the chief cook and bottle washer here!”

Aho is not the only one using BarnManager though, she’s now invited the adoptive and foster families to utilize it as well.

“It’s a super way for me to keep track of their records,” said Aho. “They can just put it in there, and we’ve got that for the future. They scan in their vet records, all of that. I know that they’re being taken care of, and I know if there’s a problem without them having to hunt me down.”

To learn more about the Newfoundland Pony Conservancy Center, visit www.newfoundlandponysanctuary.org or find them on Facebook here!